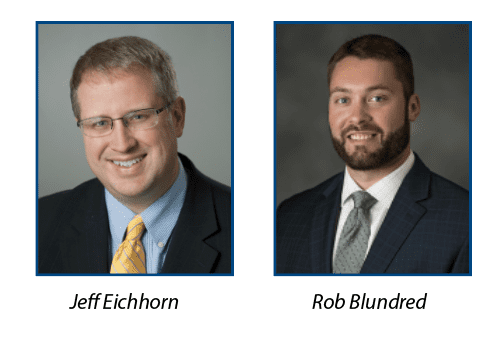 The organization honored approximately 50 members of the 2019 Top Producers Club for their achievements at a recent awards banquet. To qualify agents had to produce $2.5 million in sales/leasing volume during the 12-month recognition period. This is a second consective year Jeff and Rob have been recognized for this award.

Activity in the commercial and industrial real estate market is a key indicator of the vitality of the Greater Cincinnati/Northern Kentucky region.

Rob has been named as a top industrial producer for 2019. He is a licensed Broker with Henkle Schueler & Associates, a division of Schueler Group. He has extensive experience in the fields of retail, office, industrial development and construction. Rob has assisted some of the area’s largest corporations and small businesses in achieving their real estate goals. He has also been featured on the Cincinnati Business Courier’s website authoring an article detailing the differences in commercial leases.

Jeff has been named as a top office leader for 2019.  He is an experienced and respected commercial real estate agent who has been with Henkle Schueler since 2007. Since 2009 Jeff has been featured multiple times in publications for closing some of the largest commercial transactions in Greater Cincinnati. Jeff works tirelessly for his clients and is a licensed Broker in Ohio and agent in Kentucky.

Congratulations to Jeff and Rob on an outstanding year!

Click her for a link to the Commercial Top Producers section in the Cincinnati Business Courier.

Copyright © 2021 All Rights Reserved.
The Schueler Group of Companies