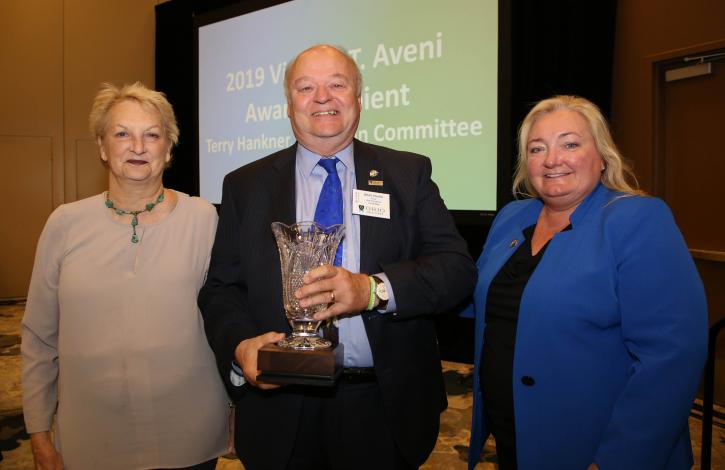 The Vincent T. Aveni Lifetime Achievement Award recognizes those Past Presidents of Ohio REALTORS that provided exemplary service to the organization. Aveni served as President of the organization in 1980 and the Award was created after his passing in 2006.

The Award, created by the Ohio REALTORS Past Presidents Committee, is bestowed upon a Past President who has demonstrated a continued commitment to the same values and passion for excellence that Aveni displayed throughout his life.

On the national level, Knapp has contributed to the REALTORS Political Action Committee (RPAC) at the Sterling R Major Investor level for more than a decade, he is the industry’s Federal Political Coordinator for U.S. Sen. Rob Portman, has served as a National Association of REALTORS (NAR) Director for several years and as NAR Region #6 Vice President. In addition, he has served on multiple committee, including as chair of the NAR Interpretations & Procedures Advisory Board in 2015.

Additionally, he serves as a director of the Ohio Housing Finance Agency and is a member of the Cincinnati Council – US Navy League. He was also a member of the city of Lebanon Civil Service Commission, the Lebanon Comprehensive Plan Steering Committee, the Warren County Housing Advisory Board, trustee of the Community College Advisory Board of Warren County, and director of the Otterbein Retirement Committee.

“There could not be a more fitting honoree,” said Ohio REALTORS President Anjanette Frye. “Throughout his career, Brad Knapp has provided unparalleled leadership and vision to the advancement of the real estate profession, as well as finding time to make his community a better place to live and work.”

This article originally appeared on the Ohio Realtor’s website. https://www.ohiorealtors.org/blog/1169/brad-knapp-honored-with-lifetime-achievement-award/

Why You Should Consider Investing in Farmland

The Cincinnati-Dayton corridor is growing. In fact, out to Indianapolis and down throughout Northern Kentucky, commercial and industrial real estate is only becoming more valuable and more in-demand. As we watch commerce grow in the region, The Schueler Group does everything we can to stay apprised of the best locations for businesses to plan their expansions or entries into the area’s marketplace. Industrial operations are growing, with new players entering the market every day. As jobs and money are added to our local economies, it will only attract even more businesses looking to step into the Midwestern markets, so investing in industrial real estate in the Cincinnati and Northern Kentucky region is basically a sure thing.